Eliminating hepatitis C virus as a public health threat among HIV-positive men who have sex with men (version 1.1.0)

Background: Outbreaks of hepatitis C virus (HCV) infections among HIV-positive men who have sex with men (MSM) have been observed globally. We use a multi-modelling approach to estimate the time and number of direct-acting antiviral treatment courses required to achieve an 80% reduction in HCV prevalence among HIV-positive MSM in the state of Victoria, Australia.

Methods: Three models of HCV transmission, testing and treatment among MSM were compared: a dynamic compartmental model; an agent-based model (ABM) parametrised to local surveillance and behavioural data (“ABM1”); and an ABM with a more heterogeneous population (“ABM2”) to determine the influence of extreme variations in sexual risk behaviour.

Results: Among approximately 5000 diagnosed HIV-positive MSM in Victoria, 10% are co-infected with HCV. ABM1 estimated that an 80% reduction in HCV prevalence could be achieved in 122 (IQR 112–133) weeks with 523 (IQR 479–553) treatments if the average time from HCV diagnosis to treatment was six months. This could be achieved in only 77 (IQR 69–81) weeks if the average time between HCV diagnosis and treatment commencement was reduced to 16 weeks. Estimates were consistent across modelling approaches; however ABM2 produced fewer incident HCV cases, suggesting that treatment-as-prevention may be more effective in behaviourally heterogeneous MSM populations.

Conclusions: Major reductions in HCV prevalence can be achieved among HIV-positive MSM within two years through routine HCV monitoring and prompt treatment as a part of HIV care. Compartmental modelling approaches are likely to produce conservative estimates for settings where detailed behavioural data are unavailable. 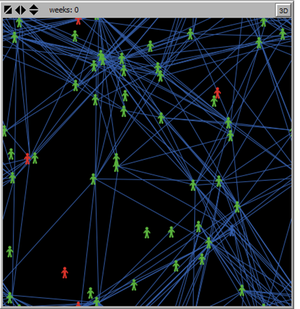 This is a companion discussion topic for the original entry at https://www.comses.net/codebases/5234/releases/1.1.0/