A Model of the The Gender Cliff in the Relative Contribution to the Household Income (version 1.0.0)

In Western countries, the distribution of relative incomes within marriages tends to be skewed in a remarkable way. Husbands usually do not only earn more than their female partners, but there also is a striking discontinuity in their relative contributions to the household income at the 50/50 point: many wives contribute just a bit less than or as much as their husbands, but few contribute more. Our model makes it possible to study a social mechanism that might create this ‘cliff’: women and men differ in their incomes (even outside marriage) and this may differentially affect their abilities to find similar- or higher-income partners. This may ultimately contribute to inequalities within the households that form. The model and associated files make it possible to assess the merit of this mechanism in 27 European countries. 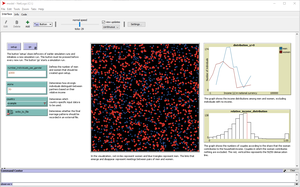 No release notes entered with this release.

This is a companion discussion topic for the original entry at https://www.comses.net/codebases/4e97fa4a-db5b-4cff-acea-5314201af5ce/releases/1.0.0/