This tutorial shows how to containerize an R model in a Docker image. As a result, you will be able to run simulations in a container and get the results in a folder that you specify.

Containerizing your model using just an R installation is the preferred method for archival purposes, but if you are looking for a way to containerize your model and still be able to use RStudio within the container, please follow this tutorial. This series of tutorials was developed assuming that the user has a finished model and is looking for a straightforward way to containerize it. Another possibility is to develop your model within the Docker image, which is covered in the R Docker tutorial, produced by rOpenSci Labs.

To start this tutorial, you will need to have Docker installed in your computer, as well as the R files of your model. To be able to see the results of your simulation, the code has to write the outputs in a results folder. We will use as an example the implementation of Schelling’s segregation model proposed in this tutorial by simulatingcomplexity. If you want to try the following steps using the same example, you can copy the script we include at the end of this tutorial. Following our suggested directory structure, we created a project folder named MyDocker and it contains the folders data, docs, results, and src. schelling.R is in the src folder and the rest of the folders are empty.

Here is a video walkthrough of the steps described below: 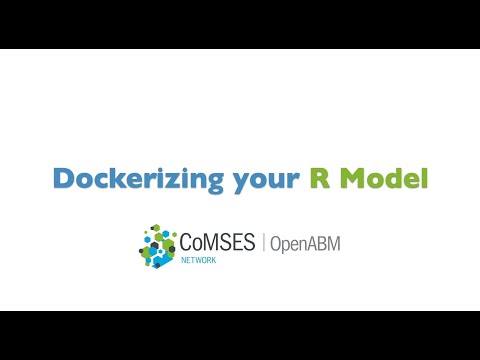 1. Determine what folder to use

Docker looks for the files existing in the folder where you are when you call the build command. Therefore, it is important to verify you are able to navigate to the folder that contains your project using command line. If that is the case, you can continue to step 2. Otherwise, we suggest you to follow Step 1.1 to create a MyDocker folder that you can later navigate to.

The Dockerfile is the file that describes how to create the image of your model and what steps to execute when you run a container based on that image. To create one, open a plain text editor (examples are TextEdit for Mac or Notepad++ for Windows) and copy the following code.

3. Modify the Dockerfile blueprint as needed

In your plain text editor, modify the following:

It is important to save the Dockerfile with the correct format and name, or Docker might not be able to use it to build your image.

The code in the Dockerfile assumes a specific organization within the folder containing your Dockerfile. Either the build or the run command will fail if it cannot find the right files due to an organization or folder naming that are different than expected. Therefore, it is necessary to ensure that the right contents are in the right folders. Your project’s folder (MyDocker in our example) can have any name, but it must at least contain:

Your project’s folder can contain other folders, like data if it uses input files.

Now we are going to create the virtual entity that will download R, contain your model, and be ready to execute your code. To build the image, open a terminal window (Terminal in Mac or Command Prompt in Windows) and navigate to the folder that contains your model and the Dockerfile (if not sure how to do so and followed Step 1.1, you can follow these short instructions). Once you moved to the directory that contains your model and the Dockerfile, type the following build command:

In our example, this build command would look like this: docker build -t r.example . .

When you press return, Docker will start showing the progress of the processes you instructed it to perform with the Dockerfile. When it is done, you will see the line Successfully tagged imagename:latest. Now you will be able to run reproducible simulations in your containerized model.

We included some known errors can that arise when building the image in our short Troubleshooting section.

Running an experiment in a container

1. Determine the folder where the experiment results should be stored

The container will open the model, run the specified experiment, and transfer the results to a folder of your preference. It is not necessary to choose a location within your project’s folder, but doing so can help with the organization of your results.

Note that subsequent runs will overwrite the result files if the same folder is used twice to receive the results. Therefore, it is a good idea to create a separate folder for each experiment that is run.

To run an experiment in the container, open a terminal window and type the run command according to your operating system:

Navigating to your folder of interest

If you are not familiar with the use of command line to move between folders (directories) and followed Step 1.1, you can follow these instructions:

Containerizing your R model on RStudio