What is a Container and why should you Containerize your Model

At CoMSES Net we use containerization as a way to distribute and deploy our computational models. In this section we will explain containerization, Docker, and why you should use it. We also provide a list of tutorials so you can dockerize your model written in platforms like NetLogo and R Python.

Why should you use this (and keep reading on)?

One of the main advantages of using containers is their portability, which is an issue that we have to face frequently. For example, it is still somewhat common to see presentations where the supporting slides look distorted or their formatting is evidently wrong. This is a case of poor portability: the same file can produce distinct results in different computers, due to differences between the versions of the software (be it PowerPoint, NetLogo or any other), the operating system they are designed for, or even the versions of extra components it uses (plug-ins, NetLogo extensions, R packages, etc.). In our example, the same file produces different versions of the slides depending on the computer that is used to open it, which is usually not a very serious problem, but the same can apply to any computational model, potentially undermining the reproducibility of its results.

Being able to produce an image for your model allows you to run it in different machines in a reliable way, irrespectively of the programs that these machines can have installed (as long as they have the software that allows them to run the containers; more on that later). This is useful if you are developing your model in a team, or if you plan to run it on a high throughput computing service. The container includes the right versions of the software and extensions or packages that should be used, as well as your code, which allows it to produce uniform results in any computer that runs it. On a more general perspective, using containers is useful if you want your code to be runnable even after 4 or 5 years and still generate reproducible results, even when the software versions used now become obsolete, in case future researchers would want to build on your work (which in the spirit of good science should be one of our main aims). 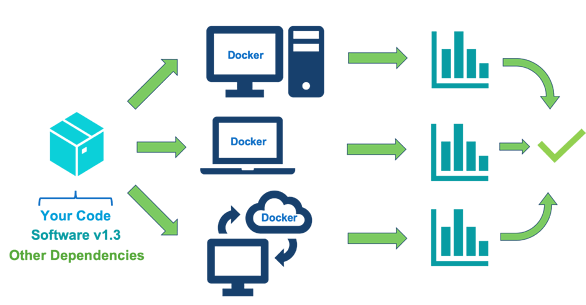 What exactly is a container?

The following is the definition given by Docker (more on Docker in the next section):

A container is a standard unit of software that packages up code and
all its dependencies so the application runs quickly and reliably from
one computing environment to another.

In other words, a container can be understood as a bundle composed by your code and the software environment it uses, plus any additional extensions or packages it needs to run. The contents of a container are isolated from the context of the computer that runs it. This means that there is no communication between the code run in a container and the data or programs present in the computer, save for the cases where the user explicitly creates a connection between a folder of his machine and one in the container. In those cases, the shared information is limited to the files present in the designated folders.

Before the advent of containers, the issue of isolation used to be solved through Virtual Machines (VM). As containers, VMs do not have communication with the computer that runs it, but they require the installation of a separate operating system as the foundation of their environment. On the contrary, containers run on top of the operating system, which makes them lightweight and easy to run.

A container runs from a previously built container image (or just “image”), which is a collection of the necessary files and information of the relationships between them, that is ready to be run in any computer. One useful analogy is to think of an image as a recipe (or a recipe that somehow includes the necessary ingredients), and the container as the action of cooking the plate. Images can be easily shared and also reused to build new images, using the existing ones as a base. When we talk about “containerization” (or “Dockerization” when containerizing using Docker), we refer to the act of building the image that will allow you to reproduce your model’s dynamics and results in any computer.

As we were saying, containers are made to be able to run anywhere, because they include all the necessary software, except for the platform that is able to interpret the instructions embedded in the container image. One of the most used platforms is Docker. This is the preferred tool for many users because it is a platform built on open source technologies. It has the additional advantage of offering an extensive library of curated images, created by software vendors, open-source projects and the community. These images can be easily used as a base to create the environment to run your code.

On Mac OS X and Windows you should use Docker Desktop, which can be downloaded here. Instructions for installation on different Linux distributions such as Ubuntu and Fedora are also available.